Which UK residents want to move?

Moving house is a tough job, but sometimes we just have to do it. A change of home can happen for many reasons. You may have taken a new job opportunity in a different city, or your living situation could change. No matter the reason, moving into a new home is something we all have to experience at some point in our lives.

Here at AddLiving, we began to wonder if there were some UK residents more interested in moving than others. After conducting some research, we’ve discovered which areas of the UK residents are more likely to want to move or stay.

Choosing the phrase ‘flats to rent’, we used the forecast tool on Google’s Keyword Planner to identify the locations with the highest impressions. After collating this data together, we then calculated the percentage of the population for each named location searching for this term. This then gave us the final result of the areas most likely to search for ‘flats to rent’. These results can be seen under ‘the UK residents most interested in moving’ and ‘the UK residents most likely to stay put’ headings. We have excluded the locations where no data was available.

Using Ahref’s keyword generator, we searched for ‘flats to rent’ and collated the results with any UK location mentioned. These results were then organised by volume to identify the UK locations residents most want to move to.

Sometimes, moving is the best option. You may move into a home better suited to you, or you might get access to better jobs. Either way, it seems that certain UK locations are more likely to move than others.

Brentford is a suburban town in West London, at the confluence of the River Thames and the River Brent. It has a population of 2,085, and yet with 96.03 impressions, 4.61% of residents have been searching for ‘flats to rent’. This is the highest percentage of searches by a long shot, so this could show that many are looking to move away from the city of London.

The university town of Egham in Surrey is next on the list, with 1.20% of residents looking to move. This doesn’t account for a huge amount of the population, but it is a high enough number that they made it to number 2.

Hertfordshire in the East of England is known for many beautiful places, including Waltham Cross. This town, just 12 miles from central London, is known for the Eleanor Cross, but it seems that this iconic landmark is not enough for residents. 1.15% of Waltham Cross residents are looking to move.

The city of Leicester in the East Midlands sits close to the eastern border of the National Forest. It is known not only for its football team and for being the largest city in the East Midlands, but also for its beautiful scenery. That said, 1.03% of the population here want to move.

Beaconsfield is a market town in Buckinghamshire. Although it sits close to the Chiltern Hills Area of Outstanding Natural Beauty, 0.66% of the population are looking to move away. Considering the town was named ‘Britain’s richest’ in 2008 by The Daily Telegraph, it could be this reputation that makes people want to move. 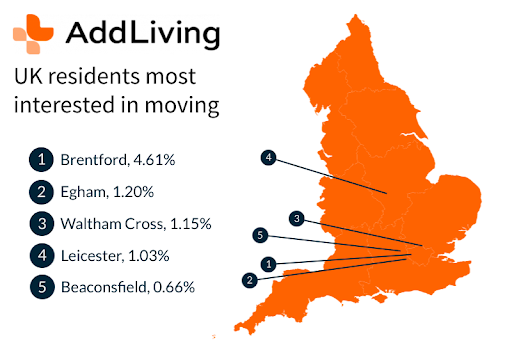 The UK residents most likely to stay put

When you find the right place to live, you want to stay there. Our research has found the five locations across the UK where residents want to stay put, instead of going through the hassle of moving.

At the top of the list is the cathedral city of Chester. Sitting on the River Dee, it is one of the best-preserved walled cities in Britain and also a place residents don’t want to leave. Just 0.01% of residents have searched for ‘flats to rent’.

Another cathedral city on this list is Durham. Located in the North East of England, 0.01% of residents have been looking for somewhere new to rent. This could be as a result of the number of World Heritage Sites in the area, or the sheer amount of history.

The second-largest city in West Yorkshire, Bradford is a historic city to visit, and it seems that it is also a place people want to live. 0.02% of the residents have looked for somewhere new, no doubt thanks to its rich tourist industry.

The city of Newport lies in the south of Wales and was once one of the largest coal exporting ports in the country. Now a thriving city with a rich history to explore, it has become a favourite destination for many tourists, as well as Welsh residents. It seems that this history and stunning location makes it the ideal place to settle, with just 0.02% of the population looking to move.

Rotherham in South Yorkshire is a historic town and one of the places that residents wish to stay. With only 0.02% of the population here looking for ‘flats to rent’, it seems that its location in South Yorkshire makes it a desirable place to live and to stay when you move to the area. 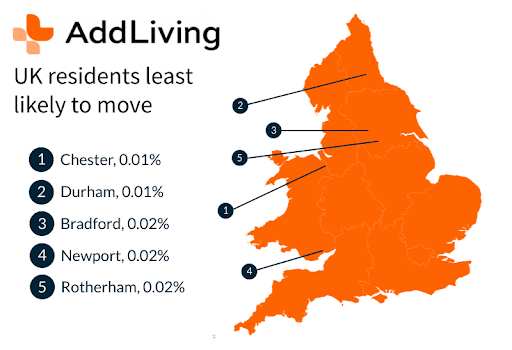 Where do we want to move to?

The most popular destination for those looking for flats to rent is Glasgow. As the most populous city in Scotland, it is a national cultural hub and a growing destination, which is why so many people want to move to the area. There have been over 9,000 searches for ‘flats to rent Glasgow.

The stunning and thriving city of Edinburgh is the second Scottish city to appear on this list, with over 7,000 searches for ‘flats to rent Edinburgh’. It is home to many historical locations, including Edinburgh Castle, Arthur’s Seat, and the Old Town. No wonder people want to move here.

Known for football, the Beatles, and Liverpool dock, this gorgeous city is also a top destination to move to, with over 5,000 searches. It is also one of just two English cities on this list and the only one in the North West.

England’s capital city has proven to be another popular destination in England that people one to move to. Renting in the capital can be expensive, but that isn’t stopping people from looking for the right place. In fact, over 5,000 searches for flats in the capital have been made.

Scotland seems to be the place to live with our fifth location on the list and the third Scottish city being Dundee. The coastal city has a rich maritime history as well as beautiful art galleries and museums to visit, making it a destination many wish to not only visit but also move to.

The last two years have been difficult for many, which is why UK residents are looking to make a move. They want to get a fresh start in 2022 and move to a new and exciting location. For a large majority, it seems that Scotland is the must-live destination.

Do you agree with the findings of our research? Where would you move to if you could? Join in the discussion on social media.